I have been trying to boot up my Raspberry Pi 3B ever since January 2018. I had tried Raspbian, Windows 10 for IoT, and Retro Pi. None of them seemed to work for me, because despite having a wireless router, I could not have bridged internet facility from my phone to the router. This was pretty much critical for me. Enter Android Things.

I had indeed heard about Android Things before, but realized that it would work on my Raspberry Pi3 only towards the end of June 2018. Thus, I started off trying to install Android on my RPi.

Before you can start using the setup utility provided, you need to create an account first on the Android Things Console. After creating an account, you need to register a device here. In this particular case, it is going to be a Raspberry Pi 3, and you have to agree the terms for using it as a non-commercial device.

Once you are done with that, you can download the setup tools provided in the Android Things console. You can then use the instructions on this page to setup Android Things on your Raspberry Pi 3.

Optionally, you can also setup Wi-Fi on the Raspberry Pi as well. Just follow the setup instructions after you have flashed the Android Things Image on the SD Card, within the same terminal screen.

ACCESSING YOUR NEW IoT DEVICE WITHOUT AN EXTERNAL DISPLAY

Congratulations on setting up your new IoT device. Now how would you check whether it is working or not. Obviously if the Ethernet lights are glowing, then your installation is working fine. So far great, but now how do you access the display of the Raspberry Pi Android Things given that you don’t have one. 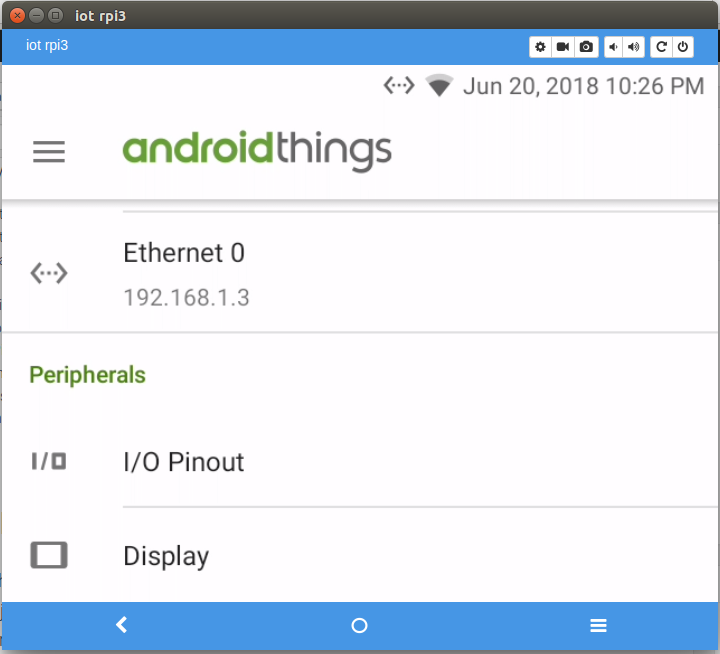 Once you setup your Android Things on Raspberry Pi 3, you will notice that the time is wrong, and the timezone is also wrong. You will also notice a gear icon next to the timezone, but that wouldn’t do anything. You will have to manually change your timezone using ADB

Now that I have set up Android Things on my Raspberry Pi 3, I should now head over to trying some sample projects and running it there. If possible, me and my team, TheAndroidPeople at FOSS@Amrita will come up with something innovative Android Things Project.